Brief Overview About Our Court System 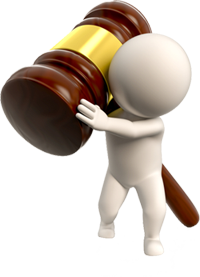 I’d like to briefly explain the court system, because it helps to understand this to understand some of the reasoning behind court decisions. The government was set up in such a way to disperse power among different branches, for obvious reasons. The separation of power resulted in creating the Congress, which is the legislative branch that makes the laws; the Presidency, which is the executive branch that enforces the laws; and the Judiciary, which is the judicial branch whose responsibility it is to interpret the law.

Jurisdiction is also an important piece to understand. The jurisdiction is the territory where a court has the power or authority to interpret and apply the law. Each state has its own jurisdiction and there is also a federal jurisdiction. Jurisdiction decides the proper location to hold a trial of a lawsuit. In criminal cases it is the county where the crime was committed. In civil cases, it is the county where the defendant lives, where the contract was signed, service performed, or act occurred. Where this all gets tricky is where to file a lawsuit when the internet is involved, since the internet knows no bounds, and travels around the world. To avoid lawsuits that could potentially happen all over the country, companies often put a ‘choice of forum’ clause in a click-wrap agreement. The agreement that so many of us don’t take the time to read, may state that you have to travel across the United States to file suit against the company that wronged you. Courts do consider the burden faced by the defendant with the interests of the plaintiff on these cases. But it still may be wise to read through those click-through agreements.

Courts do not make laws, they interpret them. In interpreting a law they look at the Facts first – who is involved and what happened. Second is the Issue that the court is being asked to decide on. Third is the Holding, or the courts actual ruling on the situation. The fourth part is called the Rationale, which is the thought process of how they arrived at the decision. This part is very important because it gives insight to future cases and how the same problem may be ruled on in the future. Once the court decision has been made, it takes on the force of law, and is rarely overturned. If a decision is overturned that in one sense it is admitting that they made a mistake, but more importantly it would cause instability from constantly changing rules. Because of this, courts go by ‘precedence’ and try to make the same decisions in similar situations. The only way the outcome would be different, is if the fact situation were different.

*Note: The above is my understanding of internet legal issues and I would like to share the information that I have learned with you. I hope you find it informative. Please keep in mind that I am not a lawyer, so please seek legal advice if you have specific questions. I will not be held responsible with respect to any wrong information contained in this subject. If anyone is aware of any errors stated on this topic, please contact me at: steph@offthepagecreations.com